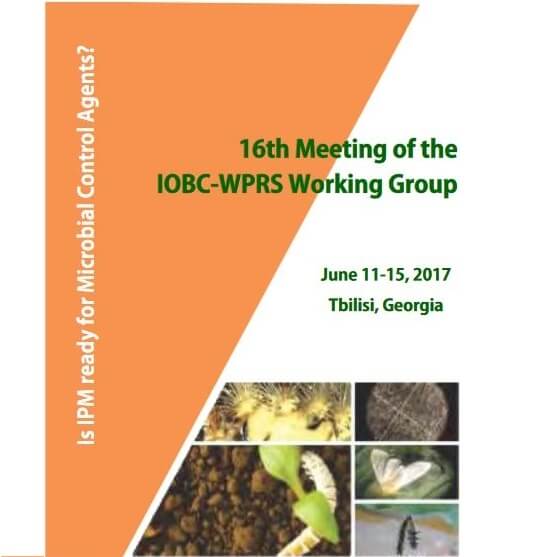 Mag. Dr. Hermann Strasser and Maria Zottele, one of his group members, will participate in the 16th meeting of the IOBC-WPRS Working Group Microbial and Nematode Control of Invertebrate Pests, to be held at the Agricultural University of Georgia, Tbilisi, Georgia, from 11 to 15 June 2017. In addition to two talks Hermann Strasser will also be the convenor of the fungi oral-session.

The western corn rootworm, Diabrotica virgifera virgifera (WCR) is causing economic damages in maize production in parts of the European Union (EU), so in Austria. The control of adults is becoming increasingly cumbersome as the WCR has a history of adapting to several management practices. The European Union has directed Member States to consider Integrated Pest Management as a strategy for controlling WCR. Entomopathogenic fungi Metarhizium brunneum (Hypocreales: Clavicipitaceae) have been found to have a real potential also for adult control. First studies conducted in Styria (Austria) showed the potential of adult spray application using safe, water dispersible Metarhizium brunneum formulations (BIPESCO 5), under real farm conditions as an innovative direct biological control method for WCR in maize production.

A long term field study was carried out to demonstrate how the preventive application of GRANMET GRTM (biological control agent based on Metarhizium brunneum BIPESCO 5) affects the mortality of Diabrotica virgifera virgifera larvae (western corn rootworm) for a sustainable population control in maize fields in Styria and Tyrol (Austria). We will report on results from a 1 year and a 5 year field study examining the effects of (i) Metarhizium  abundance after a single (in Tyrol) or periodically  inundative mass application (in Styria) of GRANMET GRTM; (ii) determine the efficacy in suppressing Diabrotica pest populations by monitoring the swarming activity of the adults using a novel emergence trap system, and to consider parameters such as (iii) damage assessment of maize plants. All relevant data will be discussed in this presentation.